Welcome to Stone-cum-Ebony Parish Council. Our meetings are normally held every third Tuesday of every other month, usually at 7.30pm, in the Memorial Hall. Parishioners may attend as observers if they are not councillors. It’s your village: help us improve it together.

What is a parish council?

We are the first tier of local government, and members are democratically elected. There are seven members on the parish council, including the Chairman and Vice Chairman, and we are assisted by the Clerk. Details of your local Stone-cum-Ebony councillors can be found in the ‘your councillors’ section.

To become a parish councillor, you must be –

Most English parishes have origins dating back 500 years, to a time when England was divided into areas knows as ‘manors’ owned by Lords. Over time, the Lord of the Manor’s rights were taken over by the church, and the obligations were managed by each church’s parochial area also known as ‘parishes’.

Over the course of several hundred years, the church’s control declined, until 1894 when Parliament passed the Local Government Act. This created local authorities, with responsibility for the administration of each Parish’s services and civil functions. These are now known as parish councils.

What’s on in the village

See under the Activities and Projects tab for more information.

Our area, and a brief history

Stone-cum-Ebony, which includes the small hamlet of Ebony, lays to the south of the nearest large town of Ashford and south east of the small vibrant town of Tenterden. Stone is located within the High Weald Area of Natural Beauty.

It is part of the Isle of Oxney, the name dating far back to near Roman times. There is a well know walking route that passes directly through the parish, the Saxon Shore Way. This is a popular destination and many a walker with map in hand can be seen walking along the marked route. Whilst the original Saxon water edge has long since changed, the original Saxon shore line can still be traced.

Stone-cum-Ebony has the Parish church of St. Mary’s plus a Baptist Chapel. Whilst St. Mary’s is situated slightly outside the village, the Baptist Chapel is on the main street. Services are not as frequent but are still held in the Chapel at certain times of the year.

The boundaries are still the traditional way of dividing up areas, following the parish church boundaries, that were formed many years ago.

The earliest local artefact is a dinosaur bone now in the custody of the Canterbury Museum.  There is evidence that people were living here in the bronze age, but still extant is a Roman altar, which was the centrepiece of a Mithraic Temple, probably on or near the site of the current church.  Roman tiles have been identified at the base of a wall of the church tower, where the stone altar can be seen today.

At that time the temple and its military outpost would have been on the coastline, overlooking an extensive marshy delta. The higher ground of the Isle of Oxney formed the edge of the great Wealden forest of Anderida.  It is now thought that the cutting down of the forest started in the bronze age, but this continued in Roman times.

Although the Domesday Survey did not record anything at this end of the island, this may be because the Vikings burnt the place down in 994 AD and it could well have been uninhabited at that time for this reason.

The name ‘Stone’ derives from ’stone ruins’: a number of villages in Kent adopted this name from the fortifications that were abandoned in the Roman exodus. The stone altar has also been identified as the source of the name of the village.

The arrival of the Normans ushered in a relatively peaceful period when woodland was cleared and farms established.  By the end of the 13th century there was a church to serve the local population and, with a new prosperity of sorts, a road was built going down hill from the church and into what we recognise today as the main street. It’s interesting to note that the main road to the church (up until this point) was the one heading north, which has Roman origins, so if we take that statement to its natural conclusion, the village of Stone may well have migrated down hill in medieval times now that the threat of invaders had been quashed.

Another factor may well have been the weather. The 13th century had fifty years of the worst weather imaginable, so violent were these storms that they changed the course of the River Rother around the Isle of Oxney forever.

Homes were built with greater permanence. A surviving example is the 15th century Tilmenden (adjacent to the church and a former vicarage-house), built shortly after the great fire of 1464 that caused great damage to St.Marys Church and also burnt down the rectory, and two other houses nearby.

Until the Reformation, the Abbey of St Augustine’s in Canterbury owned the church and most of the surrounding land, but in the years ahead its new owners built houses and they had one thing in common: they were all smuggler’s houses. Whether spare rooms hidden from view, the tiniest of windows to hold a candle to, or a spare cove for booty to be stored between inglenook fire places…there was even mention of a tunnel going from the Church to one of the houses nearby, but that could be just pub talk, the locals in the 1970s wouldn’t let the truth get in the way of a good story! But you can never be too sure.

Pride in our village 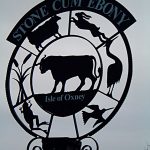 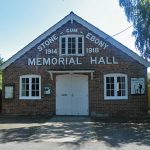 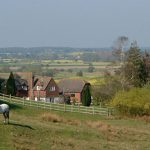 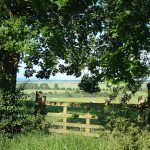 If you think a pothole has not already been seen, report it via Ashford Borough Council’s  reporting facility or on 03000 418181.

This is quicker than phoning 101, report online 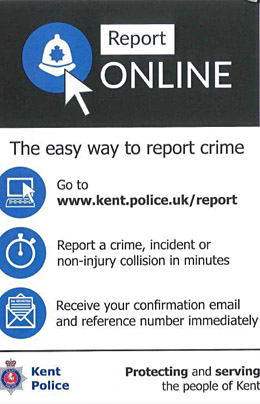